Knee pain related to osteoarthritis (“wear-and-tear”) is extremely common, affecting roughly 30 million Americans. As opposed to the knee pain that nearly everybody experiences after a day strolling through the mall or gliding down the slopes, osteoarthritis is a chronic condition, defined as “pain in and around the knee on the majority of days for at least one month during the preceding year, accompanied by characteristic x-ray changes of degeneration.” I see someone with this kind of knee pain every day. It’s a real problem. People are decidedly unhappy with: “Take some Motrin, put some ice on it, and see your doctor in 2 weeks if it’s not better.”

But let’s be clear: the ER cannot fix osteoarthritis (and neither can anybody else). It is the result of applied forces over time that exceed the body’s capacity for resistance. And just as I am no stronger in the ER than the nurses and techs surrounding me, the bones of the knee are no stronger than the muscles, tendons, ligaments, and cartilage that surround them. This is why weight-bearing exercise is so important to prevent the ravages of arthritis—it strengthens not only the bone, but also the support system surrounding it. But it’s not just about the quadriceps; it’s equally important to maintain flexibility, elasticity, and proper alignment. Stretching is critical as we age and should include the core muscles of the hip, pelvis, and low back, in addition to the traditional muscles surrounding the knee (especially the hamstrings). Yoga and Pilates work wonders here. We’ve all seen those overweight, knock-kneed people waddling through Walmart—no wonder they hurt. Spoiler alert: sedentary lifestyle and excess weight are the leading risk factors for developing osteoarthritis of the knee. Given our culture, it’s not surprising that 90% of people over age 60 have tears of the knee’s inner, shocking-absorbing cartilage (medial meniscus). 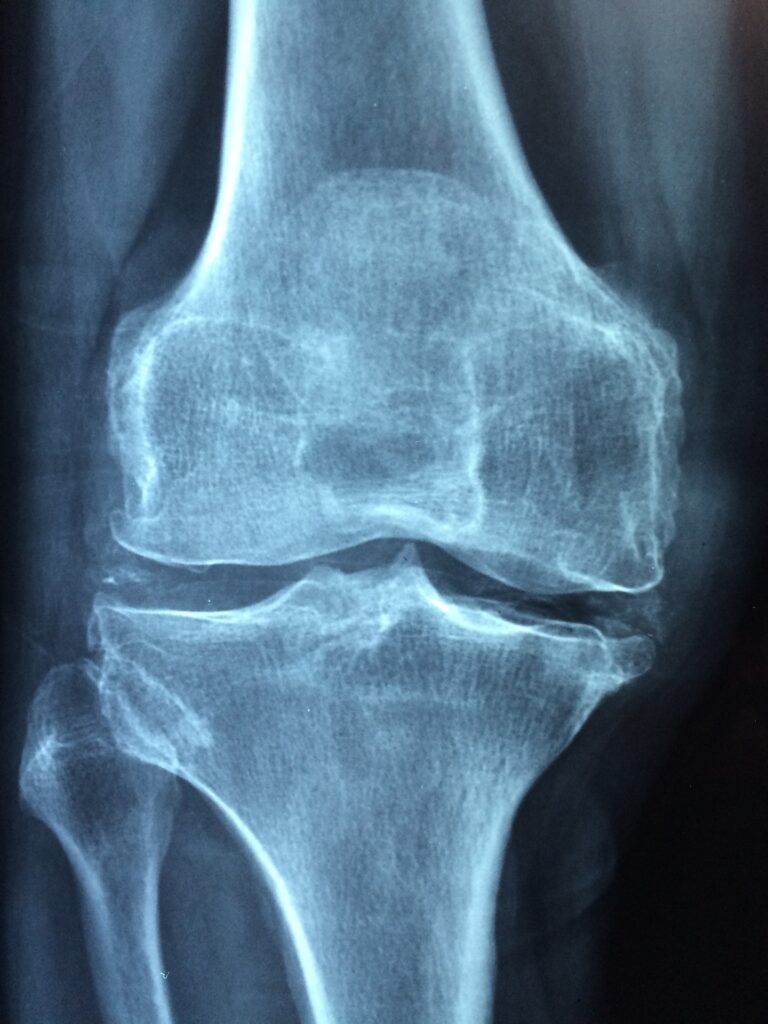 Osteoarthritis is primarily a degenerative process—not an inflammatory one—which is why NSAID drugs like ibuprofen and naproxen are largely ineffective. It’s also a stretch to think that taking chondroitin and glucosamine (substrates of cartilage synthesis) increase the density of the cartilage lining the articular surfaces of the knee, but it might be worth a shot if the alternative is a knee replacement. What’s clear is that arthroscopic surgery is of no benefit for either osteoarthritis or medial meniscus tears. It just doesn’t work [for more on why, see my posts: “I’m skeptical about … arthroscopic knee surgery” (10/5/15), and “Update on arthroscopic knee surgery” (10/8/16)].

So, if NSAIDs, chondroitin/glucosamine, and arthroscopic surgery don’t help, what about steroid injections? At least once a week someone comes to my ER requesting a “steroid shot.” When I decline they sometimes think I’m holding out, that I don’t want to be bothered, or that I simply don’t know how to do the procedure, but it’s not any of those things: it’s because steroids don’t work! It has never made sense to me to inject a potent anti-inflammatory agent into a joint suffering from a degenerative process (not to mention that there is little data to support the notion that an injected steroid actually stays where it is injected).

Earlier this year, a paper appeared in JAMA comparing the injection of either a ml of a standard steroid preparation (triamcinolone 40 mg) or a ml of salt water into the knee of 140 patients with documented osteoarthritis. Both patients and physicians were blinded to the treatment received/administered. Injections were given at 3-month intervals over 2 years. Patients were evaluated using previously validated scoring systems for pain, stiffness, function, and overall health. They were also timed on a 20 meter walk and a chair-sit-stand-and-walk test. Everyone showed trivial improvements after the first injection but nobody improved thereafter. There wasn’t even much of a placebo effect. Steroids didn’t help, but may have harmed. In addition to function and pain testing, participants also underwent before-and-after MRI scans to determine the effect of treatment on the structure of the knee. Those receiving steroids had twice the degree of cartilage erosion (0.21 versus 0.1 mm) compared to the saline group. Since cartilage erosion typically precedes bone erosion, this wasn’t a good finding. Conclusion: When injected into the knee of osteoarthritis patients, steroids provide no short-term benefit and likely cause long-term harm. Steroids are out.

That leaves total knee replacement surgery, in which the end of the femur is removed, the top of the shin bone shaved flat, and the joint replaced with a titanium prosthesis. It’s an amazing, expensive bit of surgery, and for those with severe, irreversible erosion, it likely remains the best treatment option. What concerns me is the concept of “indication creep,” wherein patients with increasingly less severe disease are opting for the surgery. Each year nearly 700,000 Americans undergo the procedure with charges totaling more than $36 billion annually. So, it had better work, right?

The first good randomized-controlled study regarding surgery versus no-surgery appeared in 2015. The Danish trial, published in the New England Journal of Medicine, randomized 100 patients to either total knee replacement surgery followed by an intensive 12-week rehab program, or the same rehab program without the surgery. Similar to the study noted above, patients were evaluated at the end of 1 year as regards to pain, stiffness, function, quality of life, and return to sports. The rehab program was fairly intense and included twice-weekly exercise sessions supervised by a physiotherapist, educational material, dietary advice, and the use of foot wedges and insoles to correct knee malalignment. Pain medications (acetaminophen or ibuprofen) were allowed at the patient’s discretion. Additionally, patients were allowed to cross-over and undergo surgery if they felt the rehab wasn’t successful. The surgical patients fared better across the board. But it should be noted that the nonsurgical group fared well, too, with 68% (versus 85% of the surgical group) demonstrating a 15% or more improvement in knee function. For the patients enrolled in this study, doing something was a lot better than doing nothing.

But should that ‘something’ be as drastic as replacing the knee? Results from other studies cite a mortality rate within 90-days of surgery of 0.5-1%, mostly from blood clots, pulmonary emboli, and/or infections, while another 20% of patients have poor outcomes with ongoing pain lasting at least 6 months. Finally, a more recent study published earlier this year found less impressive surgical results when reviewing outcomes of more than 4,000 patients from the Osteoarthritis Initiative database. Their conclusion: “Total knee replacement as performed in a recent US cohort of patients with knee osteoarthritis had minimal effects on quality of life.” Not exactly a ringing endorsement for a major, irreversible surgery. Not surprisingly, results depended largely on the degree of disability going in—those with little disability showed little improvement, while those with severe disability showed large improvement. So, if you’re a 75-year old who has failed rehab and weight loss and still has daily knee pain preventing you from walking to the mailbox then this is the surgery for you; but if you’re a 55-year old who simply wants to keep bombing down those black diamond slopes at Vail you should think again.

As for me, I have much less knee pain than I did 30 years ago, having even returned to running a couple of half-marathons a year. How did I do it? Three lifestyle changes; I stopped doing the things that were damaging my knee, like heavy, free-weight squats and playing basketball (nobody over age 35 should play this sport unless they’re being paid to do so); I kept my core strong through inline skating; and, most importantly, dedicated myself to a 21-minute routine that combines static and dynamic stretching with yoga and Pilates—it works! For osteoarthritis, prevention is the cure. Maintain a healthy weight. Stay active. Avoid the scalpel.

6 thoughts on “Update on knee osteoarthritis.”