When I started reading the medical literature on antidepressants, I couldn’t help but feel that I’d read it all before. Study after study showed that antidepressants worked to treat mild to moderate depression. It didn’t seem to matter what class of antidepressant was tested or even which agent. Not even the dose seemed to matter. In virtually every trial, 50 to 60% of the patients treated with antidepressants improved. This represents an absolute response rate about 20% higher than doing nothing. But the strange thing isn’t that people responded to treatment, it’s that they appeared to respond equally well to a placebo as to a test drug. While some studies have shown that antidepressants improve depression survey scores more than placebos, the difference has never been large enough to matter to patients—the difference is a statistical one, not a clinical one. Both antidepressants and placebos work significantly better than doing nothing, but neither work particularly better than the other. And this is the same scenario I had encountered when looking at the literature on cough medicines for cough. Everything works—but only as well as a placebo. So what is it about depression that allows it respond to treatment like a cough does to cough medicine?

This is not a trivial issue. During any given year, upwards of 20 million Americans will suffer a major depression lasting 2 weeks or more. Over the course of a lifetime, 12% of men and 20% of women will be affected. It’s a leading cause of disability and missed days at work, not to mention countless more days of diminished productivity while continuing to work. Americans lead the world in antidepressant use, with an astonishing 1 in 9 Americans over the age of 12 popping pills. That alone should be enough to give anyone pause. According to a Zion Research report, the depression market resulted in US drug sales of $14.5 billion in 2014, and is projected to grow to $16.8 billion by 2020. Antidepressant prescribing has risen 4-fold since 1988, with no end in sight. Why is it that so many people believe in the power of pills to cure sadness?

When it comes to depression, the success of the pharmaceutical industry owes more to marketing than it does to science. Long considered medicine’s poor stepsister, psychiatry languished in the brackish waters of epistemological voodoo until the late 1970s when the biological model of disease gained traction, espousing that alterations in mood and behavior were actually the result of neurotransmitter imbalances (and decidedly not due to something as nebulous as a mother’s inattention). Depression was the result of a chemical imbalance in key areas of the brain that triggered both the physical and psychological symptoms that characterize the disorder. The analogy used ad nauseum to promote this model was that depriving a depressed patient of antidepressants was no different than depriving a diabetic of insulin. Depression had to be treated. This is what I was taught in medical school. But unlike other branches of medicine where pharmacological cures are first-and-foremost constructed to fit the science, the biologic model of depression insisted that the science be made to fit the cure.

The brain is an amazingly complex processing center, home to billions of neurons that are constantly receiving and interpreting signals from both other parts of the brain and the rest of the body. Inherent to this process is a means of communication. Neurons contain a cell body and nucleus; multiple, spindly, finger-like projections called dendrites; and a single, larger, filamentous structure known as an axon. All neurons are capable of electrical conduction. When voltage of a sufficient charge arrives at the terminus of an axon, this results in the all-or-nothing gated release of neurotransmitter into the synaptic cleft, the point of communication between cells. The receiving dendrites take up the released neurotransmitter molecules, in turn, leading to neurochemical changes within the receiving cell, resulting in the passage of “messages” from one cell to another. The biologic model proposes that the cognitive changes seen in depression, bipolar disorder, and schizophrenia, are due to surpluses or deficiencies of neurotransmitters, and that “normalcy” can be restored by chemically manipulating them. The three major neurotransmitters in the brain are dopamine, norepinephrine, and serotonin. Antipsychotic drugs like Thorazine block dopamine receptors in receiving cells, while antidepressants like Prozac block the re-uptake of serotonin in transmitting ones. Working backward to “fit the cure,” schizophrenia was deemed a disease of dopamine excess, and depression one of serotonin deficiency. These models are based almost entirely upon knowledge of how the drugs work, and not how the diseases works. Despite 50 years of research there is still no convincing evidence that the biologic model is correct. Most of the data suggests otherwise. The idea that depression is due to a deficiency of serotonin is akin to postulating that pain is due to a deficiency of opioids since the administration of opioids relieves pain. Given our current overdose crisis, we can readily see where that kind of thinking leads. Reductio ad absurdum.

The best observational data in support of the biologic model is likely also the most condemning against the use of pharmaceuticals. Antidepressants work, we are told, by increasing the amount of available serotonin in the synapse, while antipsychotics work by blocking dopamine receptors. Given nature’s tendency to take corrective action, the expected response to drug therapy, in the case of depression, would be to down-regulate (decrease) the number of serotonin receptors in response to more of it being available within the synapse, and, in the case of psychosis, to up-regulate (increase) the number of dopamine receptors in response to the receptors being blocked. So what happens, after a period of time, if the drugs are stopped? The expected result would be an exacerbation of symptoms, given that the previously-treated depressed patients now have fewer serotonin receptors available, whereas the previously-treated schizophrenic patients now have more dopamine receptors. And in observational trials, this is precisely what happens. When depressed patients stop their antidepressants, they are nearly twice as likely to relapse compared to patients treated with non-pharmacological interventions like cognitive behavioral therapy or exercise. The same holds true for schizophrenia. In placebo controlled trials, the drug-treated patients have higher relapse rates upon cessation than the ones receiving placebos. The direct implication being that drug treatment alters brain chemistry to the patient’s long-term detriment, making it harder to stop a drug once it’s been started. And, of course, this is precisely what pharmaceutical companies desire—lifetime customers!

In truth, the cause of depression and other psychiatric diseases remains unknown, but undoubtedly have genetic, environmental, behavioral, and chemical components, the importance of each varying from disease-to-disease and from patient-to-patient. With something as complex and multifactorial as mood, the proposition of a single common pathway seems dubious. Since there are no measurable biological markers for depression, the diagnosis is largely dependent upon on the subjective presence or absence of symptoms. There are a multitude of scoring systems, two of the most common being the HRSD (Hampton Rating Scale of Depression, see http://healthnet.umassmed.edu/mhealth/HAMD.pdf) and the BDI (Beck Depression Inventory, included at the bottom of this post), the former designed to be administered to patients by a healthcare professional while the latter represents a self-scored inventory. Meanwhile, the latest version of the Diagnostic and Statistical Manual of Mental Disorders (abbreviated DSM-5) defines Major Depressive Disorder as follows: 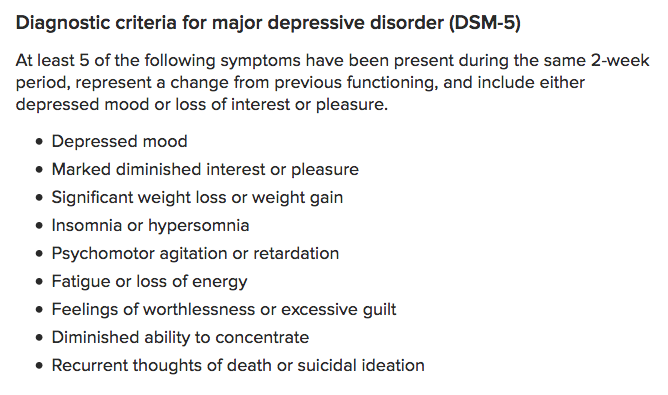 Note that three of the criteria are in direct opposition (weight loss/weight gain, sleeping too little/sleeping too much, anxious/lethargic). Well, which is it? Why 5 symptoms? Why not 4 or 6? Why 2 weeks duration? Why not 4 weeks? Why must one of the criteria be depressed mood or diminished interest (known as anhedonia)? The answer is because the diagnosis of depression isn’t really based on science. The symptom duration, the number of symptoms, even the symptoms themselves are mostly subjective, so what constitutes “major depressive disorder” is not an objective measurement of any known pathology but rather the opinion of a panel, whose appointees are almost all on the receiving end of pharmaceutical monies. The latest version of the DSM, published in 2013, was written by 141 panel members and 29 task force members, with 75% of the work groups reporting financial ties to the pharmaceutical industry. At the end of the day, the DSM is really no more than a series of checklists that allow for a sort of standardization, but more importantly provide codes for billing and a new host of disorders requiring pharmaceutical intervention.

The original manual, published in 1952 required just 130 pages to describe 106 disorders. Compare that to today’s bloated version detailing 297 disorders over nearly 1,000 pages. While covering the usual suspects like schizophrenia, bipolar disorder, and depression, the current version also contains a few more questionable disorders. Are you a glutton who enjoys “pigging out” after a few beers? You may have “binge eating disorder” (defined as eating “an amount of food that is definitely larger than what most people would eat in a similar period”). Is your child going through a normal phase of gender confusion? Be careful, lest she be diagnosed by some well-meaning therapist as suffering from “gender dysphoria in children.” How about the kid throwing temper tantrums? Poor parenting or “severe mood dysregulation?” To avoid stigma, there are no addicts in the DSM-5, only people with “use disorders.” Heroin abusers are victims, diagnosed with “opioid use disorder.” Are people really not responsible for any aspect of their personal behavior? Nearly half of Americans now meet criteria for the diagnosis of one or more disorders included in the DSM-5. Is the problem with us, or the manual? For answers, you simply have to see who profits from a nation of sick people. Doctors and pharmaceutical companies. The point here isn’t to make light of people with depression or to point a cynical finger at the doctors who treat them, but rather to acknowledge that it required a lot of strategic planning and perverse incentives to turn us into Prozac Nation. We can do better.

Next: Why antidepressants work only as well as placebos, and why exercise works better. 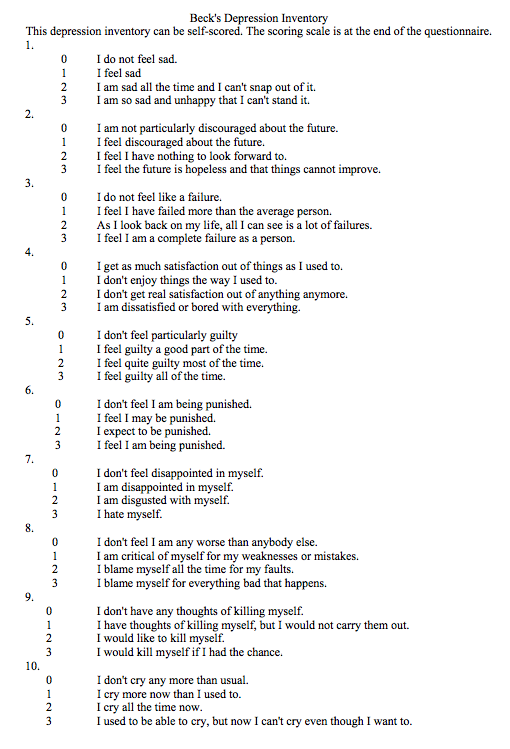 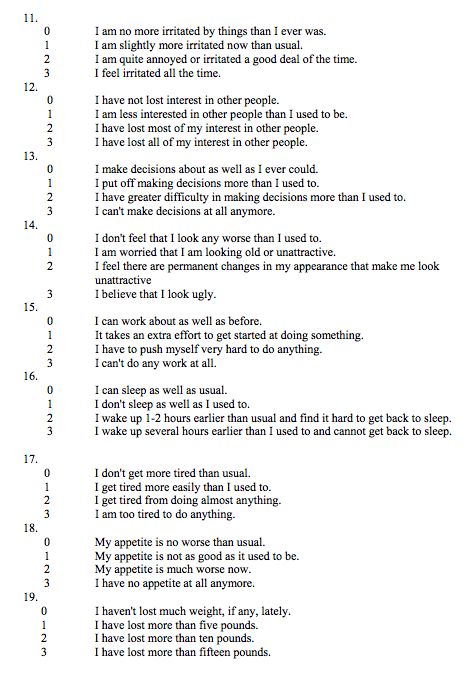 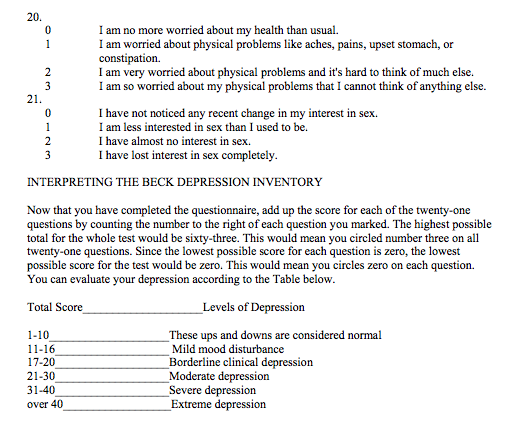 One thought on “I’m skeptical about … antidepressants (part 1).”