Diabetes mellitus is a heterogeneous spectrum of disorders characterized by episodes of high blood glucose (sugar) and impaired glucose metabolism due to a lack of insulin, resistance to insulin, or both. The term diabetes comes from the Greek for siphon, and mellitus from the Latin for sweet, thus offering a description of the disease; sweet urine. In ancient China, patients were diagnosed based on the attraction of ants to the sugar in their urine, while European physicians used to taste the urine of their patients for sweetness (glad I was educated in the US).

Simple sugars are small molecules that taste sweet. Examples include both monosaccharides (glucose and fructose), and disaccharides (sucrose, lactose, and maltose). Sucrose—otherwise known as cane sugar or table sugar—is composed of one glucose and one fructose molecule linked together. And here’s where it gets tricky because complex carbohydrates like starches and grains, while devoid of the taste of sweetness, are actually chains of simple sugars linked together forming long-strand polysaccharides. So, while it’s easy to recognize the sweet taste of sugar in a soda, many people don’t realize that they’re getting just as much sugar from their bowl of pasta or shredded wheat. Both are carbohydrates. Once broken down, the body can’t tell the difference. Only monosaccharides are capable of being adsorbed through the lining of the small intestine, so no matter how the carbohydrate starts out it ends up as a simple sugar. The process begins in the mouth with salivary enzymes, continues in the stomach, and is completed in the small intestine. Once absorbed, all this sugar needs to be stored for use, and that’s where insulin comes in.

Synthesized in the beta cells of the pancreas, insulin facilitates the uptake of glucose into fat cells, skeletal muscle, and liver where it is stored as glycogen. It’s an amazing compound that also promotes amino acid uptake and fat synthesis. Insulin is the body’s primary storage hormone; its effects are anabolic.

Type 1 DM (formerly known as “juvenile-onset”) is characterized by an absence of insulin due to the destruction of pancreatic beta cells. This form of diabetes typically begins early in life, and requires treatment with insulin. Only 10-15% of diabetics have type 1 disease. It represents a bad luck roll of the genetic dice and is largely unmodifiable.

Type 2 diabetes, on the other hand, is linked to a sedentary lifestyle and the intake of excess calories. Gradually as the pancreas is forced to work overtime synthesizing insulin in response to repeated caloric challenges, the amount of insulin secreted diminishes and its effectiveness wanes. This type of diabetes responds to lifestyle modification and oral medicines. If the disease progresses to the point where the beta cells of the pancreas fail altogether then insulin is required. 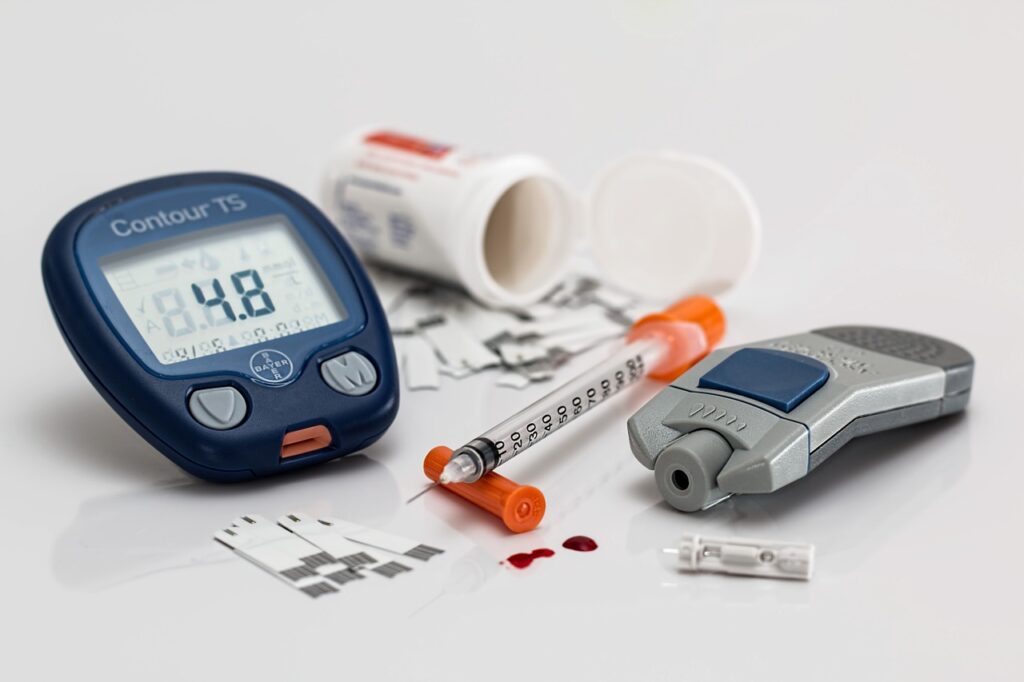 The body’s reserve capacity is tremendous, such that by the time patients start experiencing elevations in blood sugar, they have typically already lost 50% of their beta cell function. As sugar accumulates, physics dictates that the body dilute it by drawing water from surrounding tissues into the bloodstream. The kidney, when faced with this excess blood volume, does what it is supposed to do, excreting both fluid and sugar into the urine. Unlike the situation where a person drinks a lot of water and urinates the excess, the diabetic is first urinating excessively and then drinking large amounts to keep up. Thus, diabetics are water siphons producing large amounts of sugary urine. If the disease goes untreated, the body eventually shifts toward a starvation state characterized by weight loss, malaise, fatigue, and dehydration. The most feared acute complication—diabetic ketoacidosis—is a true medical emergency that can result in coma and death.

Diabetes is defined by one or more of the following:

[Note: Hemoglobin is the molecule that carries oxygen in red blood cells and, as it turns out, there are several different subtypes, one of which (A1c) becomes more prevalent when red blood cells are exposed to a high-sugar environment. The lifespan of a red blood cell is roughly 90 days. The percentage of A1c thus provides an indirect measure of glucose control over the preceding 3 months. And just as your dentist knows whether you’ve been flossing, a diabetic who only takes his medication before his physician’s office visit will be found out as having been noncompliant based on his A1c result.]

Now here’s the scare: Diabetes affects 9% of the total US adult population, nearly 30 million people, and the prevalence is expected to triple by 2050. Worse, there are millions more with undiagnosed pre-diabetes (fasting blood sugar 100-125 mg/dL). More than a third of American adults suffer from metabolic syndrome, characterized by one or more of the following: a large waistline, elevated triglycerides, low “good” HDL-cholesterol, elevated blood pressure, and/or elevated blood sugar. Diabetics and those with metabolic syndrome are at increased risk for heart disease, stroke, and sudden cardiac death. Diabetes is the leading cause of blindness, neuropathy, kidney failure, and non-traumatic limb amputation (hard to skate with one leg but it can be done). In addition to being a leading risk factor for stroke and heart disease, diabetes is the 7th leading cause of death in the US, accounting for more than $245 billion in annual expenditures. Overall, diabetics can expect to live 10 fewer years than non-diabetics (a mortality penalty equal to smoking).

With so much to be cynical about, why am I optimistic? Because up to 90% of all new cases of diabetes in the US are type 2. Here, the disease is largely one of lifestyle. We can alter the gloomy projections simply by altering what we eat and how much we exercise. The incidence, prevalence, and prognosis for this disease falls largely into our hands. And that is great news! 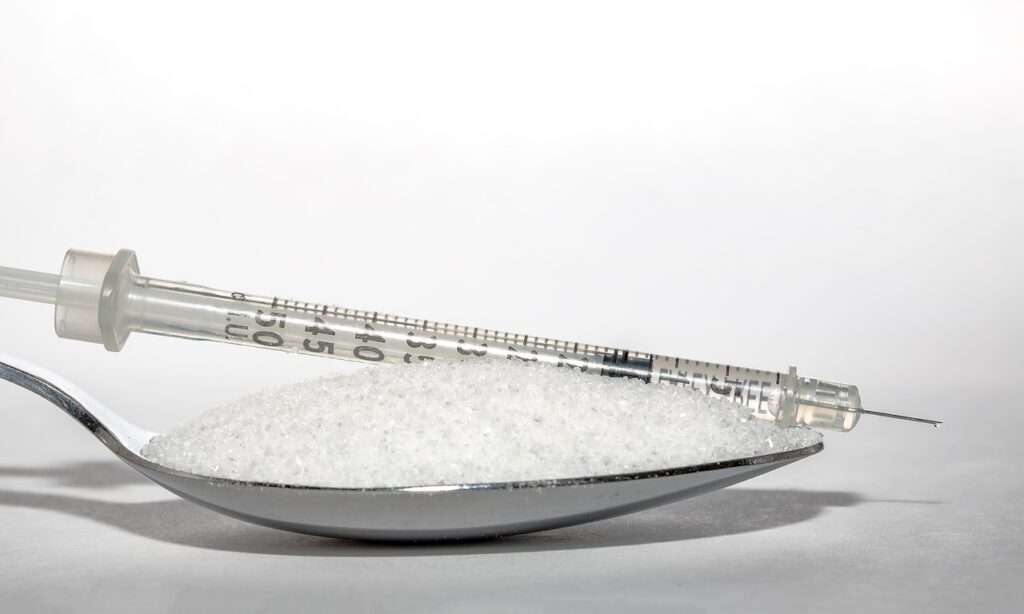 Current best estimates indicate that at least half of all type 2 diabetes could be prevented simply by maintaining a healthy weight and exercising regularly. Lifestyle interventions work better than medication. A large trial comparing diet and exercise to metformin in pre-diabetics to prevent disease progression was stopped prematurely when it became obvious that lifestyle intervention was far superior to drug therapy (51% versus 31% reduction, respectively). Exercise alone reduces the risk of developing type 2 diabetes by 30-50%. It also lowers the risk of developing breast and colon cancer, and represents your best bet to stave off dementia. Exercise works better than medication for mild-to-moderate depression, and is clearly superior to benzodiazepines (e.g. Xanax and Ativan) for anxiety. And while it might not help you lose that spare tire, exercise will reduce your risk of heart disease, stroke, diabetes, cancer, hip fracture, falls, arthritis, dementia, and depression, even if your body weight is already in the normal range. If exercise were a pill, people would pay any price for it—but it’s not, it’s free. So, go ahead, walk, run, ride, swim, hike, skate, or ski your way to better health.

A motivated individual can do a lot. In a Finnish study that randomized more than 500 overweight, pre-diabetics to either lifestyle intervention versus usual care, at the end of 3 years 20% of control patients had developed type 2 diabetes, compared to just 9% of the intervention group. Interventions included: 1) loss of 5% total body weight, 2) dietary fat intake of less than 30% total calories, 3) saturated fat intake of less than 10% total calories, 4) dietary fiber intake equivalent to 15 g./1000 cal. consumed, 5) physical activity of 4 or more hours per week. Although most of the participants weren’t successful in achieving these goals, of those successful in at least 4 of the 5 targeted interventions none developed diabetes. Zero. There was no magic pill, no surgical intervention, no special diet. Just motivation. I find this news incredibly empowering.

What if you hate exercise? In the US, 80% of type 2 diabetics are either overweight (BMI 25-29.9) or obese (BMI greater than 30). For those with extreme obesity (BMI greater than 40), bariatric surgery provides the best solution. In one study, 75% of obese diabetics experienced remission after bariatric surgery, whereas none of the diet group achieved the same. In another, surgery was 30-times more likely to prevent progression to type 2 diabetes than dieting alone.

Epidemiologic studies find that sustained weight loss reduces the risk of developing type 2 diabetes by 50-75% depending on the starting point and the number of pounds shed. Unfortunately, diets fail. Lifestyle modification works; diets don’t. And you can forget all the hype stating that carbs are the enemy. Although counterintuitive, when controlling for the total number of calories consumed, multiple trials have failed to establish a link between high carb diets and diabetes. Another number not to worry about is the glycemic index, a measure of the relative rise in blood glucose levels that occur after a food is eaten compared to an equal amount of white bread (glycemic index 100). If you like like rice go ahead and eat it. Just not too much, because it’s the total number of calories consumed that counts, not the type of calories (fat, protein, or carbohydrate). There is also the problem of insulin overshoot after a high carbohydrate meal, wherein insulin levels spike an hour or two later resulting in a big drop in blood sugar (i.e. the afternoon yawns). Moderation is the key.

Unfortunately, there is so much background noise in the diet data that the only real takeaway is the obvious one: calorie restriction results in weight loss. There is better data, however, to recommend limiting fats to 30% and saturated fats to 7% of total calories consumed. Doing so reduces both the risk of diabetes and cardiovascular disease. Since these numbers are impossible to track in your head, I recommend using a smart phone app to do it for you. I use MyFitnessPal and it works great—just enter what you eat, and it spits out the calories and content (nutrients, salt, fats, protein, and carbs). It also has an excellent workout section that estimates the caloric expenditure associated with just about any type of exercise you can think of, from rock climbing to yoga. Best of all, it’s free.

The Hawthorne effect is the alteration of behavior in study subjects due to the awareness that their behavior is being observed. It works consciously and subconsciously, and applies here in the sense that just knowing you are monitoring your caloric intake will alter the amount and type of calories you consume. (Doing this, of course, also has a down side in revealing just how hard it is to keep calories under 2,000/day, while restricting fat to 65 g/day, and sodium to 2,400 mg/day.) Trust, but verify. Your body knows what to do, and if you listen well, the chances are very good that you’ll never confront the sharp end of an insulin needle.

For those struggling to keep their sugar under control, there are a host of community resources to help including hospital outreach programs, support groups, and diabetes prevention programs like the one offered at your local YMCA. If you already have diabetes, the CDC provides an excellent downloadable guidebook to help manage it. (https://www.cdc.gov/diabetes/pubs/pdf/tcyd.pdf) 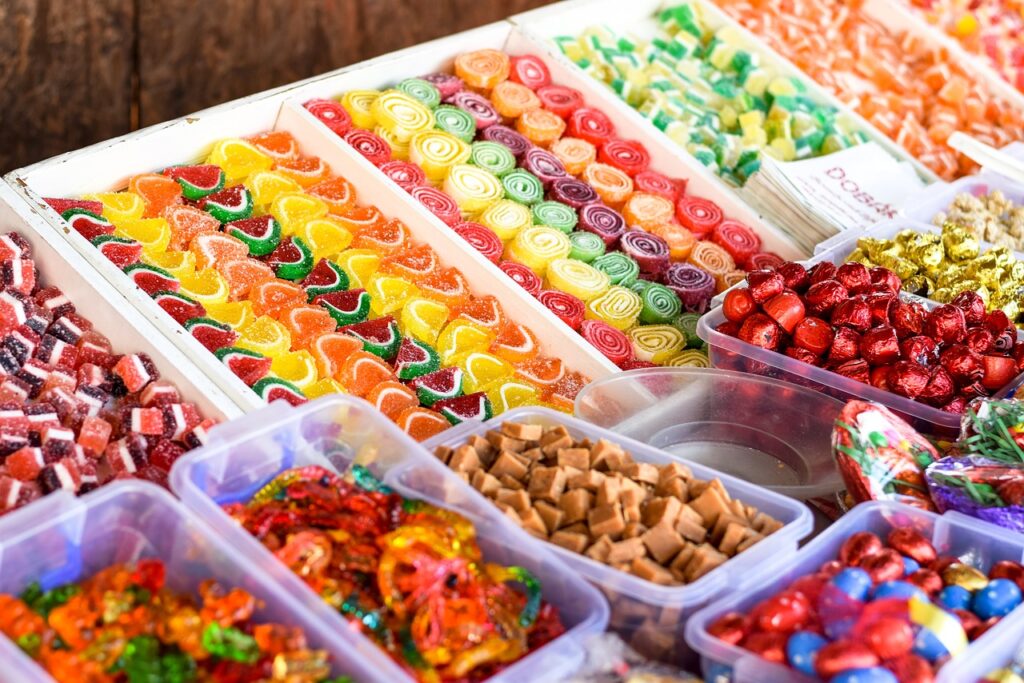