I am a seasoned physician, thirty years into my career. During COVID, with time on my hands, I re-read Samuel Shem’s (aka Stephen Bergman) seminal book about medical internship, The House of God, published in 1978, a book I’d first read during my own internship in the late 1980s. For balance, I simultaneously read Matt McCarthy’s internship memoir, The Real Doctor Will See You Shortly, written in the aftermath of his internship in 2008-09. Although much has changed over the intervening thirty years, some things haven’t: Interns are still uncertain; they still need mentors; they still make mistakes (a lot of them); competence comes slowly; and the work remains arduous. On review, Shem’s is the more cynical tale, filled with self-loathing and the political bitterness of the post-Watergate era, whereas McCarthy plays it straight, warts without the snarking. Both books are worth a read for those interested in medical training as learned by humans, not heroes. 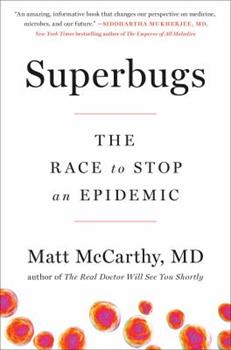 Flash forward a dozen years and McCarthy is now an academic, working as an infectious disease specialist at New York-Presbyterian Hospital. The dilemma facing him and us is a shortage of antibiotics during a time of increasing bacterial resistance. Most antibiotics fail. Resistance is inevitable. Human use alters the calculus, so when given the opportunity to investigate a new drug to treat antibiotic-resistant skin infections, McCarthy jumps.

In his first book, McCarthy was mentored by a smart, quick-thinking resident nicknamed Baio (for his resemblance to the actor). This time around, in Superbugs: The Race to Stop an Epidemic, the mentor is Tom Walsh, a brilliant, erudite, Renaissance man who knows something about everything, and everything about quite a lot. He is McCarthy’s advisor, but it’s clear that the success or failure of the trial rests with McCarthy, who is responsible for developing the treatment protocol and convincing the hospital’s Internal Review Board to approve it, before enrolling patients and administering a drug that he can only hope will work where other drugs have failed. The outcome is far from certain. The drug, dalbavancin, is administered via a single IV infusion, or two infusions spaced one week apart, allowing patients to avoid hospitalization. McCarthy only briefly touches on the drug’s hefty price tag, retailing for thousands of dollars per vial. It might pose a net savings for those facing hospitalization, but is far more expensive than standard oral outpatient antibiotics.

In addition to those involved in the drug trial, McCarthy treats patients with fungal infections, mysterious ailments, and those infected with other “Superbugs,” a reference to highly antibiotic-resistant strains of bacteria. This is a growing problem, ranking tenth on the World Economic Forum’s list of top global impact risks, right up there with climate change, weapons of mass destruction, and large-scale cyber-attacks. The hubris of past physicians, like Nobel laureate Macfarlane Burnet, who declared in 1962 that antibiotics had led to “the virtual elimination of the infectious diseases as a significant factor in social life,” seems hopelessly naïve today. McCarthy makes the case for better stewardship and, of course, he’s right.

McCarthy humanizes the narrative through the use of patient anecdotes, like the case of Soren, a heroin addict with a non-healing, antibiotic-resistant skin infection, and Remy, a German girl with leukemia, faced with an incapacitated immune system and a deadly fungal infection. McCarthy also incorporates historical anecdotes, like the tale of Mississippi Mud, an antibiotic isolated from Bornean soil samples that, when purified, resembled the mud of the Mississippi River bottom, (later christened “vancomycin” for its ability to vanquish infections). The narrative moves quickly, providing insights into the inner workings of a modern-day, academic, teaching center. By book’s end, readers will applaud the hard work and dedication of today’s investigators. This is a good read that doesn’t require an MD degree to appreciate, but an interest in science helps.