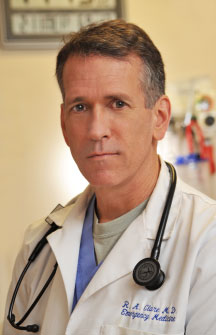 Robert Clare, MD, is an emergency physician who works as an independent contractor providing emergency services to several ERs in southeastern Virginia and North Carolina. He writes and blogs (http://skepticalep.com) about topics relevant to emergency care. His medical philosophy is that lifestyle intervention almost always trumps medication for routine emergencies like back pain, headache, hypertension, and diabetes. He is concerned that today’s emphasis on technology has resulted in over-testing, over-diagnosing, and over-treating “diseases” that pose little or no threat to health. “The CT scanner has largely supplanted the ‘laying on of hands’ as the primary tool in the doctor’s armamentarium.” He does not see this as a good thing. After two decades of working in busy community ERs, he has come to the conclusion that physician mindfulness—paying attention to the present, the common, and the ordinary—is the single most important tool to providing safe, effective patient care. “Multitasking in the ER leads to doing many tasks poorly rather than doing one task well.”

Bob’s book, ER Confidential, is a medical memoir of his journey through the front lines of emergency medicine. As a member of both the American College of Emergency Physicians and Hampton Roads Writers, his goal is to entertain, educate, and engage readers to become better consumers of emergency care. ER Confidential is his first book. Meanwhile, a previously written novel remains under wraps patiently awaiting his return for another chance at daylight.

Bob lives in Virginia Beach with his wife and children who are busy attending college, applying to grad school, and playing soccer throughout the Mid-Atlantic region. A cat completes the scene by shredding any furniture previously unscathed from his children’s toddler years. Spare time is consumed with cycling, running, and especially inline speedskating where Bob has been a fixture on the outdoor racing circuit for years.