In my last post about screening colonoscopies, I noted that the test harms 7 to 8 people for every one that benefits, but the harms are likely justified given that colonoscopy also has the capacity to prevent future cancers through polyp removal. I’m afraid the numbers for screening mammography in asymptomatic women to look for breast cancer are far worse. Here, it’s hard to make a case for universal screening.

As can be seen from above, many women have to be screened for one to benefit. Unfortunately, it’s not so simple as mammography being either beneficial or neutral, there’s also a downside. I know this sounds heretical, but screening mammography actually harms far more women than it helps. Before you write me off as a quack, here are the numbers from the Cochrane collaborative regarding screening mammography: For every 2,000 women undergoing screening for 10 years there will be 1 breast cancer death averted at the expense of 10 cases of overdiagnosis (breast cancer diagnosed and treated that was never destined to cause harm if left alone) and more than 200 cases of false positive mammograms (“abnormal” mammograms leading to biopsy and/or additional testing where no cancer will ultimately be detected). And those numbers are conservative; in the US where radiologists are more likely to overcall “iffy” cases, the false positive rate for annual screening over 10 years approaches 50% resulting in harm to 1,000 of 2,000 women screened to prevent 1 breast cancer death. Wrap your mind around that number for a while before calling for my head on a platter. 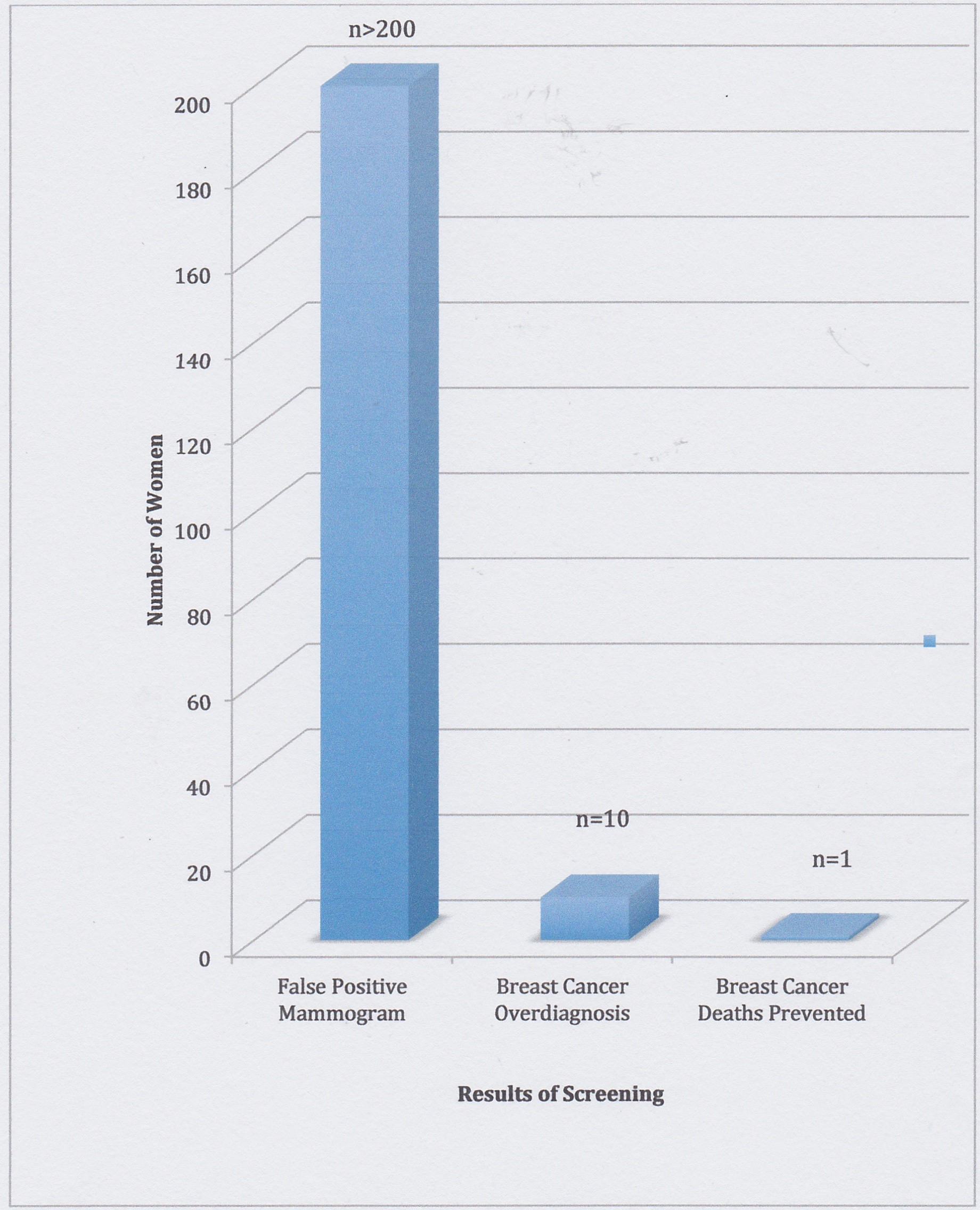 Harms and Benefits of Screening Mammography in 2,000 Women For 10 Years  [Adapted from Gotzsche and  Jorgensen, “Screening For Breast Cancer With Mammography (Review),” The Cochrane Collaboration, John Wiley & Sons, Ltd, 2013.]

Given this, why did the American Cancer Society, in its latest update from October 2015 recommend annual screening for women starting at age 45, transitioning to biannual screening at age 55? Well, breast cancer is a terrible disease. Over her lifetime a women faces a 1 in 8 chance of being diagnosed with it. Breast cancer is the second leading cause of cancer death in US women, with more than 230,000 new cases detected annually resulting in 40,000 deaths. Breast cancer killed my mother. 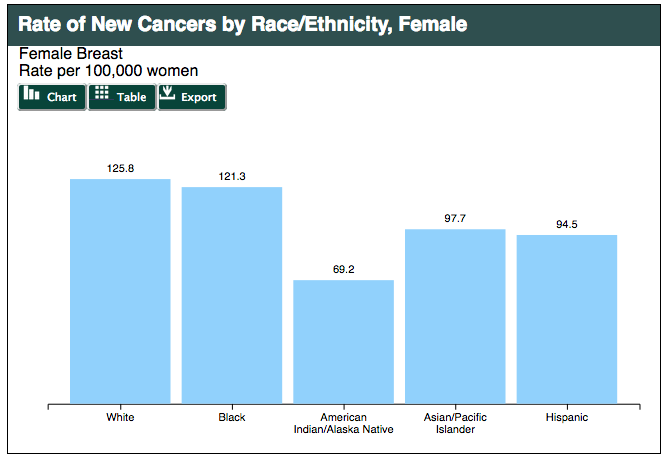 Fortunately, breast cancer is also very amenable to treatment when discovered early. The 5-year survival rate for small, localized disease is 95%, but drops to just 26% once the cancer has metastasized. Given this, it would seem to be an excellent choice for screening. Furthermore, we have resources to screen for the disease, the most common tool being mammography. The results have been encouraging. Breast cancer mortality has declined since widespread adoption of screening mammography, dropping by an annual 2.2% since 1990 (an absolute decline from 71 to 51 deaths per 100,000 women). How much of this decline is due to screening is up for debate. The best data suggests that most of the decline, on the order of 70%, is due to improvements in treatment and lifestyle rather than screening. The bottom line, however, is that fewer women are dying of breast cancer and that’s great news. 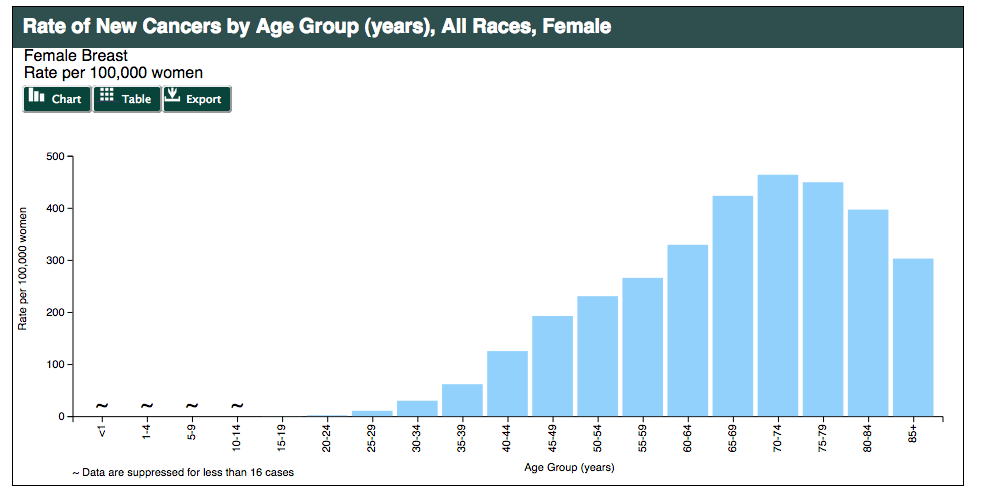 Of course, no test is perfect and mammography is the example that proves the rule. The test misses 1 in 6 breast cancers. My mother’s cancer wasn’t found by mammography. It was found the old-fashioned way after a physician felt a knot in her armpit that proved to be a metastatic lymph node. Even a retrospective look at her mammograms failed to reveal any cancer. But the real problem with mammography isn’t that it misses some disease, it’s that it overcalls disease in many patients who don’t have it. The “false positive” rate is high, leading to lots of additional mammograms, MRI scanning, biopsies, and lumpectomies in women who don’t have cancer. It also leads to fear and anxiety. One study found that the psychological trauma of a false positive mammogram lasts for at least 3 years, a time far greater than that required for additional testing to rule out any cancer. Once the seed of doubt has been planted, it’s hard to get rid of it. And let’s not forget that for most women the test itself is physically uncomfortable, while for some it’s actually quite painful.

Can women skip it? How about women examining their breasts and only performing mammograms on those who feel a lump? Unfortunately, this defeats the purpose of detecting cancers before they can be clinically felt, and also leads to a ton of false positives as women with dense breasts and fibrocystic disease are far more common than those with breast cancer. The results for self-examination are so bad that the US Preventative Services Task Force now recommends against it. This doesn’t mean that women shouldn’t occasionally palpate their breasts for lumps and bumps; it’s just that such exams aren’t very reliable in predicting cancer versus simple fibrocystic disease. 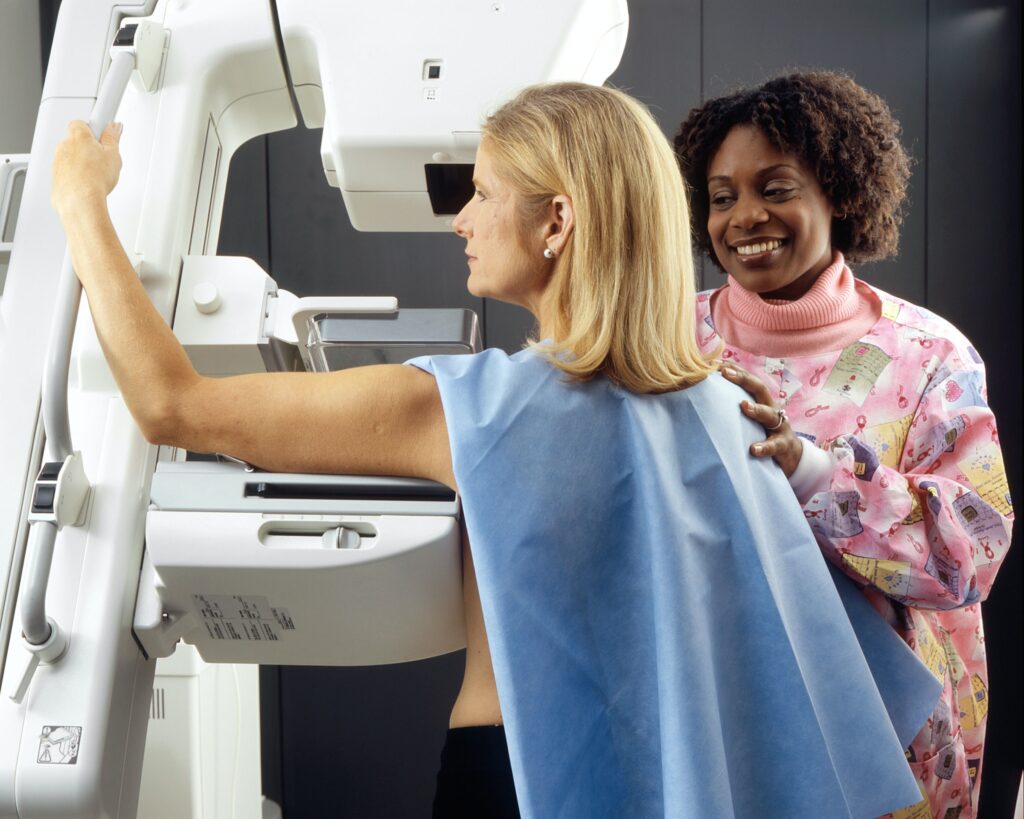 With that addressed, let’s move on to the most serious problem associated with screening mammograms—the one of overdiagnosis. What does this mean exactly? Well, as it turns out, not all cancers are destined to become invasive and metastasize. Some will remain localized while others may actually regress and go away altogether. We know this is true with prostate cancer where the majority of older men dying from other causes have pockets of prostate cancer on autopsy. The same is true to a lesser extent for breast cancer. Some breast cancers, too small to feel, will actually remain in a state of perpetual dormancy. Some will go away altogether. Here the iceberg analogy is apropos, where the ice seen above water represents the breast cancer that can be felt and is destined to cause harm. But there is also a good bit of ice beneath the surface that will never cause harm. As mammography has become better and better, we have started to detect more and more “ice below the surface” in the form of microscopic tissue abnormalities that are never destined to become invasive cancers. 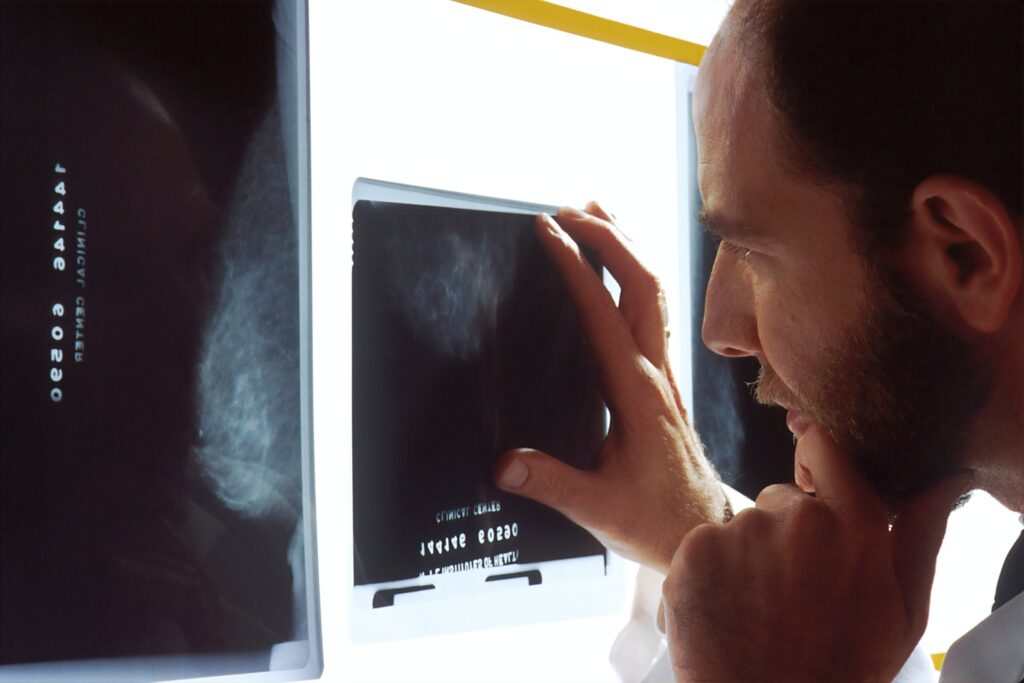 How do we know this is true? Well, we know the baseline incidence of breast cancer before the advent of cancer screening and we know the incidence now. And the results of screening have unequivocally shown an increase in the number of women diagnosed with early stage breast cancer, from 112 to 234 cases per 100,000 women screened. This is a good thing, right? Isn’t the goal of screening to diagnose breast cancer as early as possible when the likelihood for cure is greatest? True enough, but if so many more women are being diagnosed early then why hasn’t the number of women diagnosed with late-stage disease declined by a commensurate number? After all, for every woman diagnosed with early disease and cured there is one less woman who will be diagnosed with late stage disease when the cancer has become clinically obvious. Therefore, treating women early should lead to far fewer women who are diagnosed late, but that hasn’t happened. Screening mammography has largely failed to lower the number of women diagnosed with late stage disease, resulting in a reduction of only 8 per 100,000 women screened, a far smaller number than expected. Assuming that the absolute number of invasive breast cancers has remained constant over time (and there is no data to suggest otherwise), then the only plausible answer to this conundrum is that we are diagnosing far more cancer in asymptomatic women that were never destined to become symptomatic. This defines the term overdiagnosis. The current best estimate is that for every early breast cancer found through screening that would have progressed to harm, there are 10 cancers diagnosed that would never have become invasive. This also helps explain why the 5-year survival rate for all cases of breast cancer has improved (screening has added many non-fatal cases to the denominator without effectively changing the numerator). 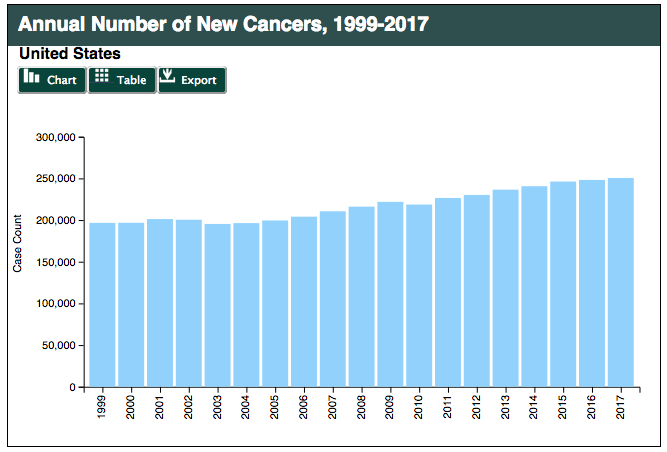 Unfortunately, there is no way to tell which of the early cancers are dangerous, so it’s a certainty that all women diagnosed will undergo some form of treatment ranging from lumpectomy to mastectomy, to chemo, radiation, and/or hormone therapy, to say nothing of the psychological terror that comes along with the diagnosis of breast cancer. This is the tragic result of screening large numbers of asymptomatic women. For every breast cancer death averted through screening, hundreds will face a false positive mammogram and ten will be overdiagnosed with cancer. Need more? In a meta-analysis of more than 660,000 women enrolled in randomized trials, despite lower breast cancer mortality, there was no difference in all-cause mortality between those undergoing screening and those not screened. In the aggregate, breast cancer screening didn’t save lives. Women simply died from other causes at roughly the same age that their breast cancer would have killed them. Now are you sure you want that mammogram?

I’m not suggesting that you skip it. The decision belongs to you and your doctor, but the data, just as for colonoscopy, isn’t cut and dried. This explains why the recommendations for screening differ between the various academic societies. There are many factors involved. Obesity increases the lifetime risk for breast cancer, as does alcohol consumption, inactivity, and post-menopausal hormone replacement therapy. Women with a family history of breast cancer in their mothers or sisters are at double the risk, while those with a BRCA mutation have a lifetime risk of breast cancer of around 50%. Each case needs to be weighed individually; potential benefit versus potential harm. There is no one right answer, even if that answer is to skip screening altogether, as was the decision of Iona Heath, former president of the Royal College of General Practitioners, who continues to “cheerfully decline” her recommended mammograms.

Finally, screening mammography is a covered service under the Affordable Care Act.

For those interested in the topic of overdiagnosis and how it effects healthcare, I highly recommend two books written for lay-people by Dr. Gilbert Welch, a Dartmouth epidemiologist who has studied the topic at length: Overdiagnosed: Making People Sick In The Pursuit of Health (2011), and Less Medicine, More Health: 7 Assumptions That Drive Too Much Medical Care (2015). 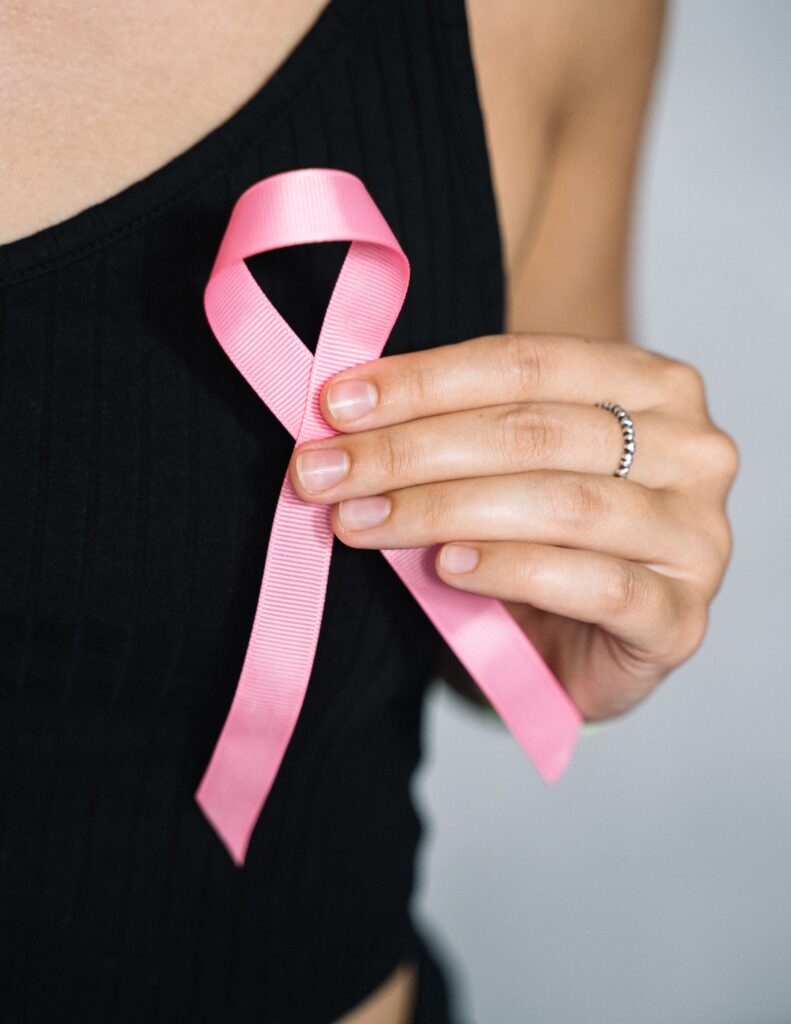