In my last post I discussed why imaging in the form of x-rays and MRI scans is not necessary for the vast majority of patients with acute low back pain. I should add that when MRI scanning is necessary the correct person to order that test is not the ER physician or your PCP, but rather a spine specialist who is capable of both interpreting and acting on the result. Patients frequently come to my ER demanding an MRI while also noting that they don’t have the financial resources to see a specialist. What do they think will happen if the scan is abnormal? They’ll be referred to a specialist, that’s what.

With that covered, let’s move on to treatment. There’s good news and bad news; while all the recommended treatments work, none of them work much better than placebo, none work for everyone, and almost all the data supporting one treatment over another is methodologically akin to junk bonds, BB at best. Even something as simple as ice or heat remains an unanswered question. Traditionally, cold applications have been recommended for acute pain and heat for sub-acute or chronic pain. But as temperature-related treatment trials are impossible to blind and susceptible to a huge placebo effect, all trial results should be greeted with skepticism, particularly when the makers of a fancy heat wrap sponsored the study. There have only been two studies comparing cold to heat—both poor quality—and they reached different conclusions: one found a roughly equal preference for cold versus heat, while the other found in favor of ice massage over heat for chronic pain. Since heat and cold treatments are dichotomously opposed, they cannot possibly be equally effective unless the source of the pain is also dichotomous (unlikely) or due to a placebo effect (likely). I’m not sure that it matters much; the goal is pain relief and since the placebo effect is real, it’s worth a trial of one and then the other if the first fails. 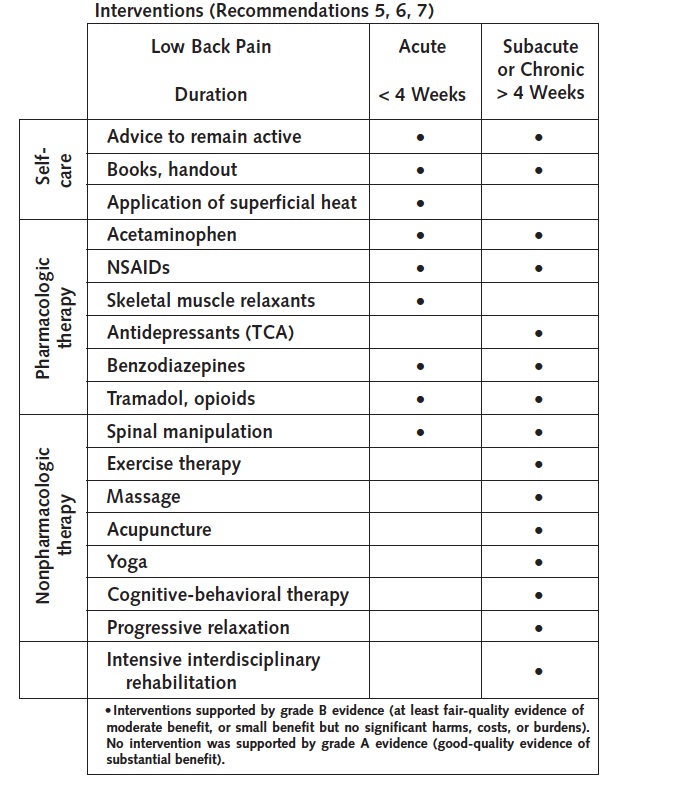 In general, people prefer heat. It’s soothing. Ice is uncomfortable, maybe even hurts a little to apply, but there is a reason why it might work better. Ice decreases blood flow: heat increases it. In the case of an acute injury, muscle spasm is modulated largely through the release of inflammatory chemicals. Decreasing blood flow, at least theoretically, reduces the release of these chemicals. As to creams and wraps that claim to be both “icy” and “hot” at the same time (while actually being neither), the sensory stimulation provided to the skin might be pleasant enough but it’s entirely illusory: nothing is actually happening. Caveat emptor.

What about chiropractic? Certainly there are lots of studies out there, but not many good ones. A Cochrane Review concluded that although spinal manipulation does provide short-term benefit for acute back pain, it “appears to be no better than other recommended therapies.” Nor does it consistently perform better than sham therapy indicating that its benefits may just be a placebo effect. The results are the same for chronic back pain: chiropractic helps but not much, and not more than other treatments. Despite this, I see a chiropractor. He’s an athlete who understands performance injuries. I like him and always feel better after a few manipulations. I’m not sure, however, whether the benefit I sense is physical, psychological, or both. 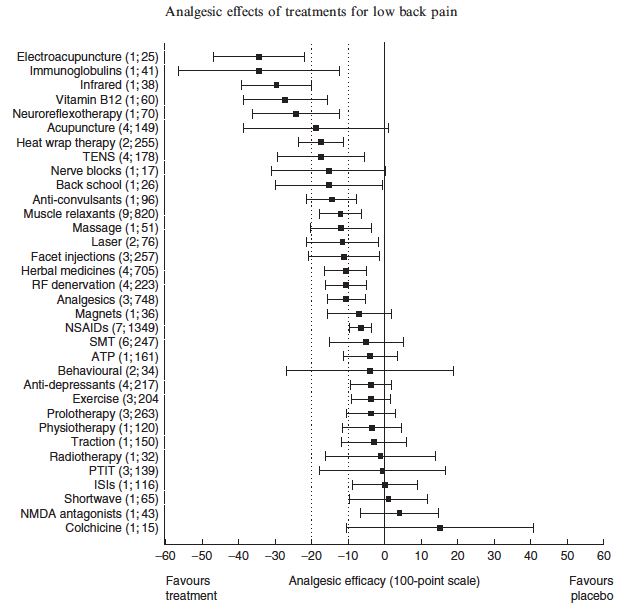 Despite the fact that low back pain is the number one reason why patients are referred for physical therapy, it doesn’t work very well and doesn’t make a whole lot of sense. Why would you take a sedentary individual with an acute injury and put him into a structured exercise program? The time to start exercising is when you don’t hurt, not when you do. In a recent JAMA study, patients with back pain were randomized to either receive a copy of The Back Book (a physician authored guide to back pain) versus receiving the same book while undergoing physical therapy. There were no clinically meaningful differences between the groups with regard to disability, pain, or function at 4-weeks, 3-months, and 1-year of follow up. I recall another study from as far back as 1998 showing much the same thing. In that trial patients were randomized to receive a pamphlet on back pain, or receive the same pamphlet and then undergo either physical therapy or chiropractic therapy. All 3 groups saw marked improvement in their disability scores from baseline with the chiropractic and physical therapy groups deriving trivial additional benefit over the pamphlet group. The only meaningful differences between the groups, however, came in the areas of cost and patient satisfaction. For 3-times the money, 75% of the active treatment groups rated their care as “very good” or “excellent,” while only 30% of the pamphlet group did. I get that people want something done, but shouldn’t what’s being done actually work? I’m all for exercise but its benefit is predominately in preventing injury, not in treating it after the fact.

Of course, there are multiple other options including acupuncture, yoga, Pilates, massage, and behavioral treatments like biofeedback, operant training, and cognitive therapy. In the aggregate, all work, but none work well. I cannot recommend one over another. In general, people with back pain arrive at a point of desperation where they will try anything and everything. I advise them to keep at it because time is the true healer here. It’s interesting to note that people with higher expectations for recovery experience substantially greater functional improvements than their negative thinking counterparts. There is a huge psychological component to how we experience back pain with stress, drama, and depression all acting as significant triggers. Stay active. When your back hurts, bed rest is not your friend and actually prolongs the duration of symptoms.

Thus far, I have avoided pharmacotherapy, although that is what most people with back pain want when they see me in the ER. (That’s right, drugs. There, I said it.) Acetaminophen (Tylenol) is recommended first, but it’s a pretty lousy pain reliever and has no anti-inflammatory properties. Next are anti-inflammatory drugs (NSAIDs like ibuprofen and naproxen). There are hundreds of trials on these drugs, nearly all showing a modest short-term benefit in treating back pain. There are major safety concerns with long-term use, however, including GI complications, bleeding, and kidney failure. And then there’s the counter argument that NSAIDs shouldn’t be used at all because inflammation is the body’s way of healing itself, and we shouldn’t be messing too much with Mother Nature. When I offer patients Tylenol or NSAIDs for pain in the ER, the statement I most often hear next is “That shit don’t work for me.” It’s a rare day where I don’t hear this verbatim comment at least once.

Next there are muscle relaxants like diazepam (Valium), cyclobenzaprine (Flexeril), methocarbamol (Robaxin), tizanidine (Zanaflex), and metaxalone (Skelaxin). All cause sedation and come with the additional baggage of a potential for abuse. Whether any of them actually “relax” muscles is open to debate, but most trials report improvement with use. Personally, I believe their benefit for back pain is similar to Nyquil’s benefit for colds—no direct therapeutic effect but sedating properties allowing for sleep.

I mention steroids only to note that they have no role in the treatment of acute episodic musculoskeletal back pain. Although often prescribed for sciatica, spinal stenosis, and acute disc herniation, their benefit for these indications is marginal at best. As for epidural steroid injections, there is no data to support that they are any more effective than oral steroids, or that they offer any long-term benefit for low back pain.

Then, there are opioids (i.e. narcotics) like oxycodone (Percocet, Lortab), hydrocodone (Vicodin, Norco), codeine, morphine, and hydromorphone (Dilaudid). These drugs work but come with a huge abuse potential that markedly limits their long-term use. In practice, patients are often issued prescriptions for an NSAID, a muscle relaxant, and a narcotic simultaneously. This combination works and is almost certainly safe when restricted to 5 to 7 days. Unfortunately, most episodic back pain lasts a lot longer than that. Take 8 to 10 Percocet a day for a month and you’re hooked—that’s all it takes. And it’s a huge problem. If I leave emergency medicine in the near future, it will be because the addicts have pushed me out the door. I spend far too much of my workday dealing with this issue.

Expensive, inappropriate, and unnecessary care—in a nutshell, that’s how we deal with back pain in the US. The Brits do it better. If you injure your back in England, you will first be issued information and advice on self-management (That’s right, your doctor will actually talk to you about how to take care of your own back!). British doctors are advised to offer enrollment into one of the following 12 weeklong programs based on patient preference: tailored exercise, chiropractic, or acupuncture. Their guideline specifically states not to order imaging, TENS units, lumbar supports, ultrasound, traction, or spinal injection of steroids—all treatments where the evidence suggests limited or no value. Patients who fail this first round of treatment are offered 8 weeks of combined physical and psychological therapy (meaning physical therapy and cognitive training like biofeedback). Patients with persistent symptoms after 20 weeks of treatment are referred to a spine specialist. MRI scanning is deferred unless the patient is a candidate for surgery. This stepwise approach drastically decreases unnecessary scanning while also allowing patients to be active participants in their recovery. Standard medications like Tylenol, NSAIDs, and muscle relaxants are used adjunctively. Short-acting opioids are allowed, but their long-term use is specifically discouraged. This is the standard for routine musculoskeletal back pain in England and it works.

This is not what happens in the States. Just last week I saw a middle-aged man in my ER suffering from 10 days of non-traumatic low back pain. He had already received x-rays, a course of steroids, a prescription for narcotics, enrollment into physical therapy, and now was in my ER for an MRI! This is American medicine run amuck, and yet the patient and his family were entirely satisfied with all the unnecessary care he was receiving, and would likely have been dissatisfied with anything less. Patients without patience, fearful physicians failing to follow evidence based guidelines, unnecessary testing, overdiagnosis, direct-to-consumer-advertising, and a profit-motivated healthcare system —all can shoulder a portion of blame for this mess we find ourselves in.

The best way to avoid getting caught up in this hamster wheel of care is to avoid injury in the first place. Exercise may not help treat an acutely injured back, but when practiced daily is most assuredly the best way to prevent that injury from occurring in the first place. Pilates, tai chi, yoga, stretching, strength training, plyometric exercises, and just walking in the woods are all wonderful ways to care for your back. If that fails, try ice packs, chiropractic, and massage. Following that, consider physical therapy. Drugs don’t help much—there are no “magic beans.” Lastly, don’t forget your brain, the organ that perceives all pain regardless of its origin. The back is tremendously susceptible to stress, so consider meditation, mindfulness, and breathing exercises. Doctors have little to offer. Go foo-foo instead. Your back will thank you.